**This post describes an entirely hypothetical asteroid impact scenario, that played out during this year’s Planetary Defense Conference**

Listen to Rüdiger Jehn, ESA’s Head of Planetary Defense as he summarises this year’s fictional impact event and why it is so important.

— Asteroid impacts are the only natural disaster we can prevent

— With good observations, we can have years – decades or even centuries – to prepare for a potential asteroid impact

— Asteroids move in defined orbits – they are predictable! Once we’ve found an asteroid and observed it over a period, we can determine where it will be at any point in the future and therefore understand if it will ever pass close to Earth.

— ESA’s Near-Earth Object Coordination Centre (among others) is constantly determining the paths of near-Earth asteroids, and calculating their risk. All this information is publically available! Subscribe to the monthly asteroid newsletter and check out the website, here

— Asteroid deflection is a reality – a global collaboration will see NASA fly their DART, ‘Double Asteroid Redirection Test’, spacecraft into the Didymoon asteroid, with the aim of altering its orbit. ESA’s Hera mission will follow up and observe the effect – a vital part of understanding the effects of a ‘kinetic impact’. Find out more, here

— Fortunately, we don’t get much practise in responding to large asteroid impacts. This means hypothetical impact scenarios are a vital tool in planning for a variety of worst case scenarios. (This year, much of the fictional asteroid 2019 PDC was deflected using multiple kinetic impactors, however the ‘head’ of this contact binary remained on a collision course with Earth, set to destroy New York. Questions about reconnaissance missions, nuclear options and evacuation and emergency preparedness became vital to the international response. See below for a day-to-day break down of what happened.)

— Find out more about ESA’s work to protect our planet here: www.esa.int/SpaceSafety

Ground-based observations, including ranging measurements by the Arecibo Observatory in Puerto Rico, have narrowed down the impact area. 2019 PDC is predicted with certainty to impact over the Central Park area in New York City – just 10 days from now.

The U.S. Federal Emergency Management Agency has requested daily updates from the International Asteroid Warning Network on the predicted impact location and damage estimates, in order to finalise their evacuation of residents and critical infrastructure and to prepare for any casualties and ultimately recovery efforts.

More details are coming in on the final twitter thread from ESA Operations:

In response to hypothetical asteroid #2019PDC – set to impact Denver, Colorado – three ‘kinetic impactor’ missions were sent to crash into the space rock and nudge its orbit away from Earth. The missions successfully deflected its main body, however, a 50-80-metre fragment is currently still certain to collide with Earth. The new impact site is unknown, but the Eastern United States and Atlantic ocean are currently at risk.

Find out more in the fourth press release in this year’s impact scenario: 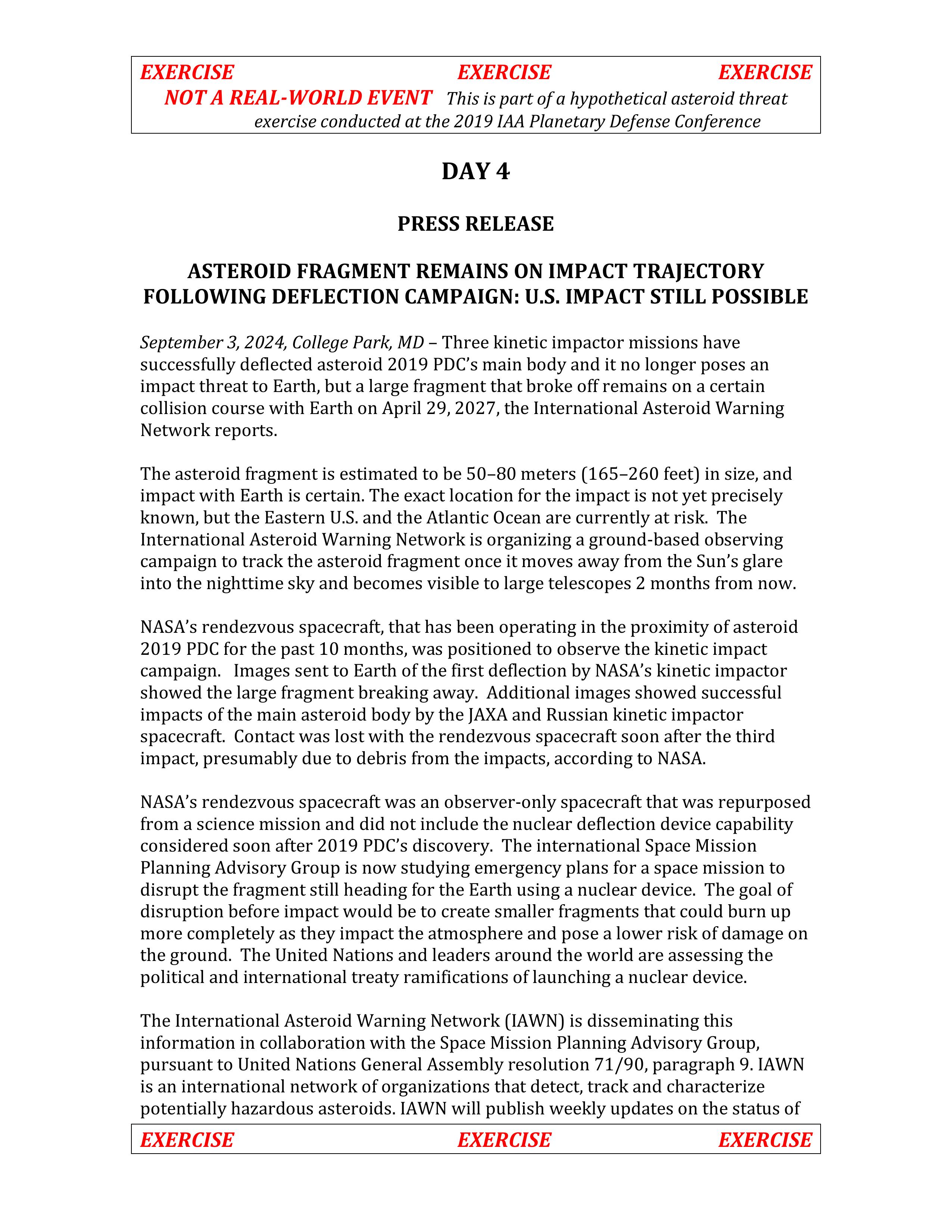 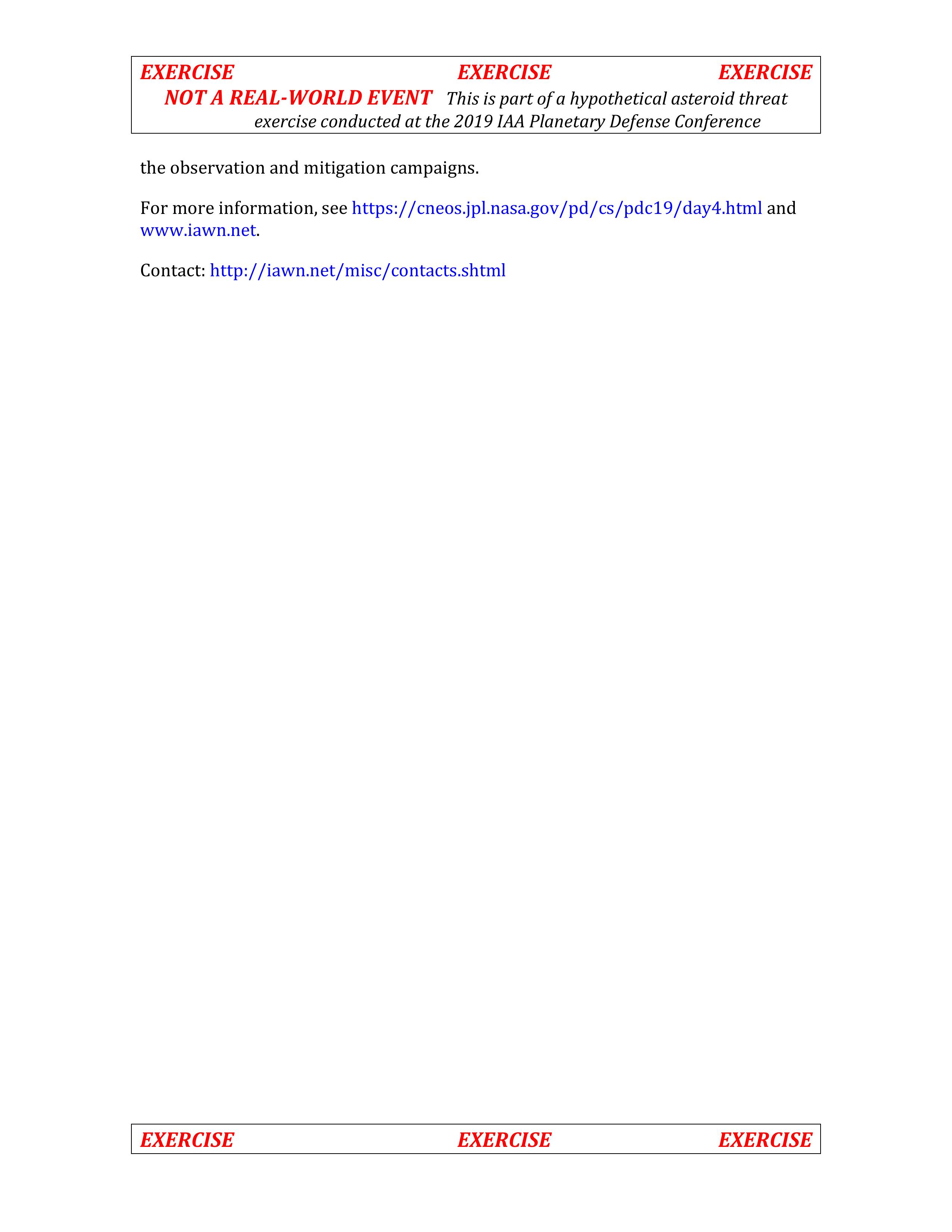 Check out the latest Twitter thread with highlights from today’s announcement:

#FictionalEvent
Earth impact is (hypothetically) certain. The exact location is not known, but the Eastern United States and Atlantic ocean are at risk. pic.twitter.com/pxri27n8aL

It was decided that a reconnaissance mission was necessary to understand more about fictional asteroid 2019 PDC’s orbit, size and composition. More than two years after the asteroid was detected, the reconnaissance mission has now discovered is that the 200-m asteroid is on a certain collision course with Denver, Colorado in the United States of America.

Follow the live updates from day three in the ESA Operations thread:

#FictionalEvent
Paul Chodas, manager of NASA’s Center for Near-Earth Object Studies #CNEOS, who designed this year’s scenario says:
“We have the resolve, we have a space programme, we can prevent this” pic.twitter.com/YpEumRe4co

The second press release on fictional asteroid 2019PDC is out, and it’s not looking good. Four months after asteroid #2019PDC is detected, observations now show the chance of Earth impact has increased to 1 in 10. 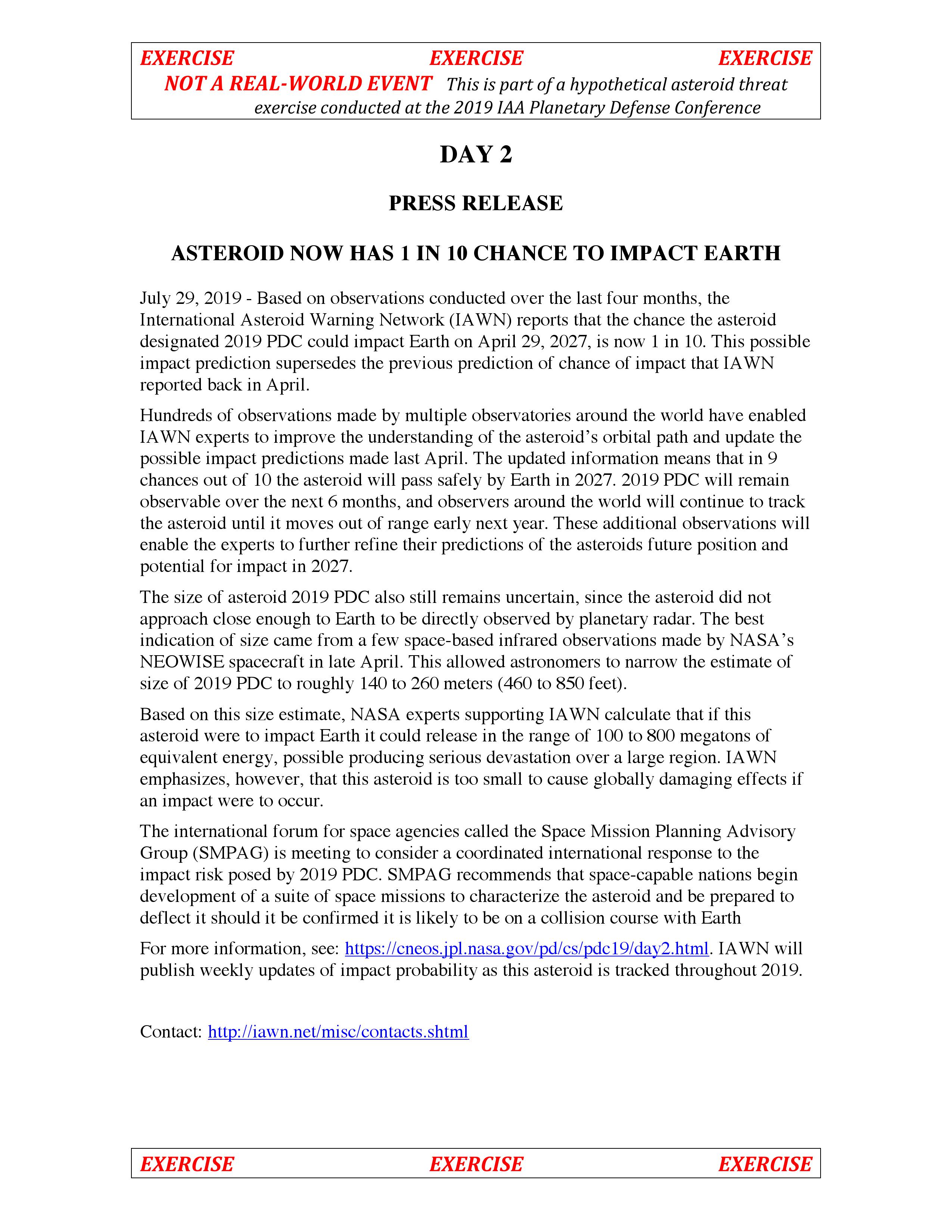 Difficult questions must now be asked. How do we deflect the asteroid? Perhaps it could be exploded? Or could we organise a mass evacuation of areas we think will be affected? Do we have enough information?

Models suggest the asteroid could impact anywhere within a ‘risk corridor’ going from Southern to Western Africa, across the Atlantic and up to North America.

Get live updates on the ESA Operations thread, below:

#FictionalEvent🌍☄️
Three more months of observations from around the world have refined our understanding of asteroid #2019PDC's orbit, which now has a 10% chance of striking Earth. Experts are performing detailed risk assessments to understand the potential impact effects pic.twitter.com/R4z4fdo5sj

Once briefed on the latest details, participants to the Planetary Defense Conference split into groups to discuss the recommendations they will put to the “Asteroid 2019 PDC Mitigation Task Force”.

First press release on the detection of asteroid 2019 PDC, similar to what would be released should a real dangerous asteroid be discovered. 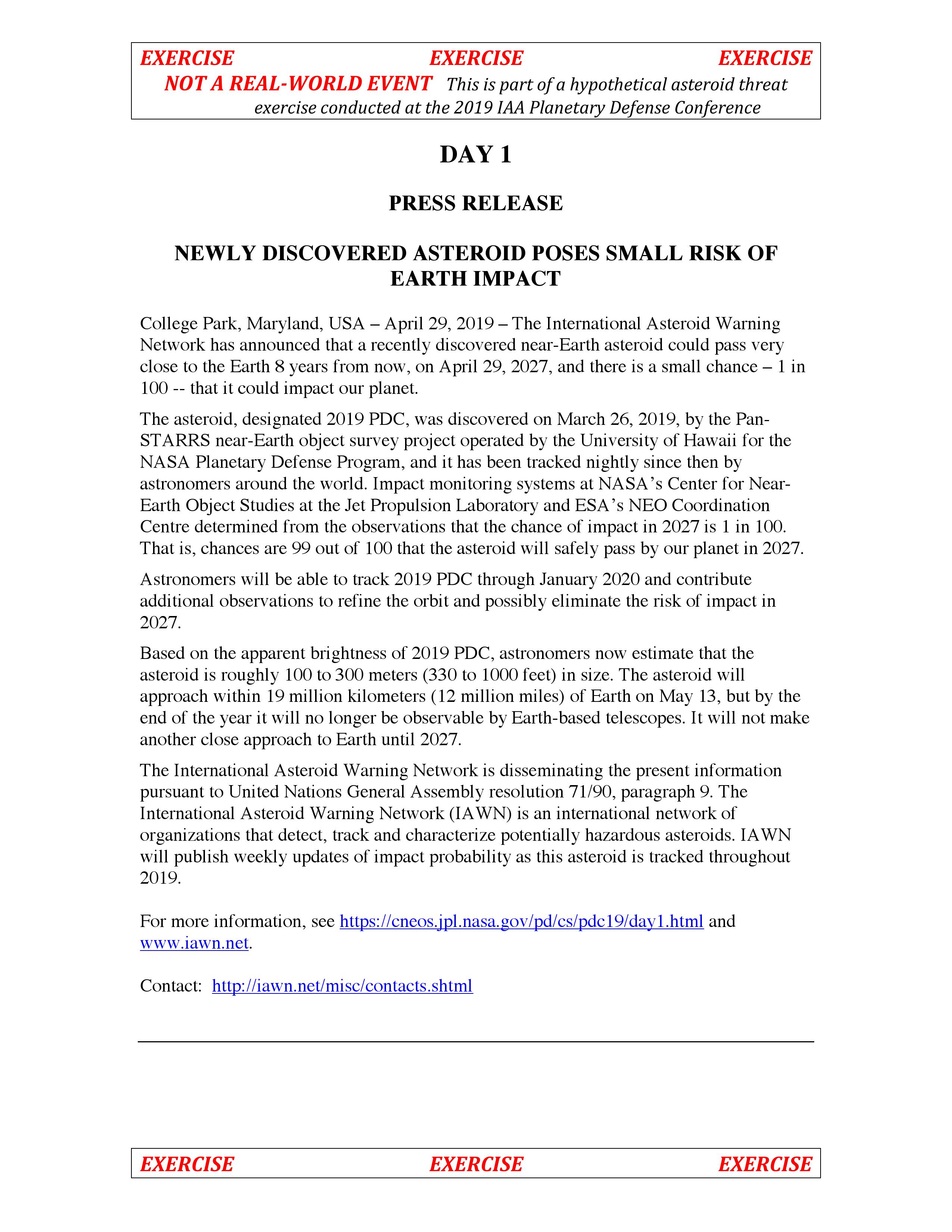 “1 in 100 may not sound like a lot, but considering the damage an asteroid of this size could cause – this is something we would need to take very, very seriously.”

Paul Chodas, creator of this years impact scenario expands on the complexities of the case: 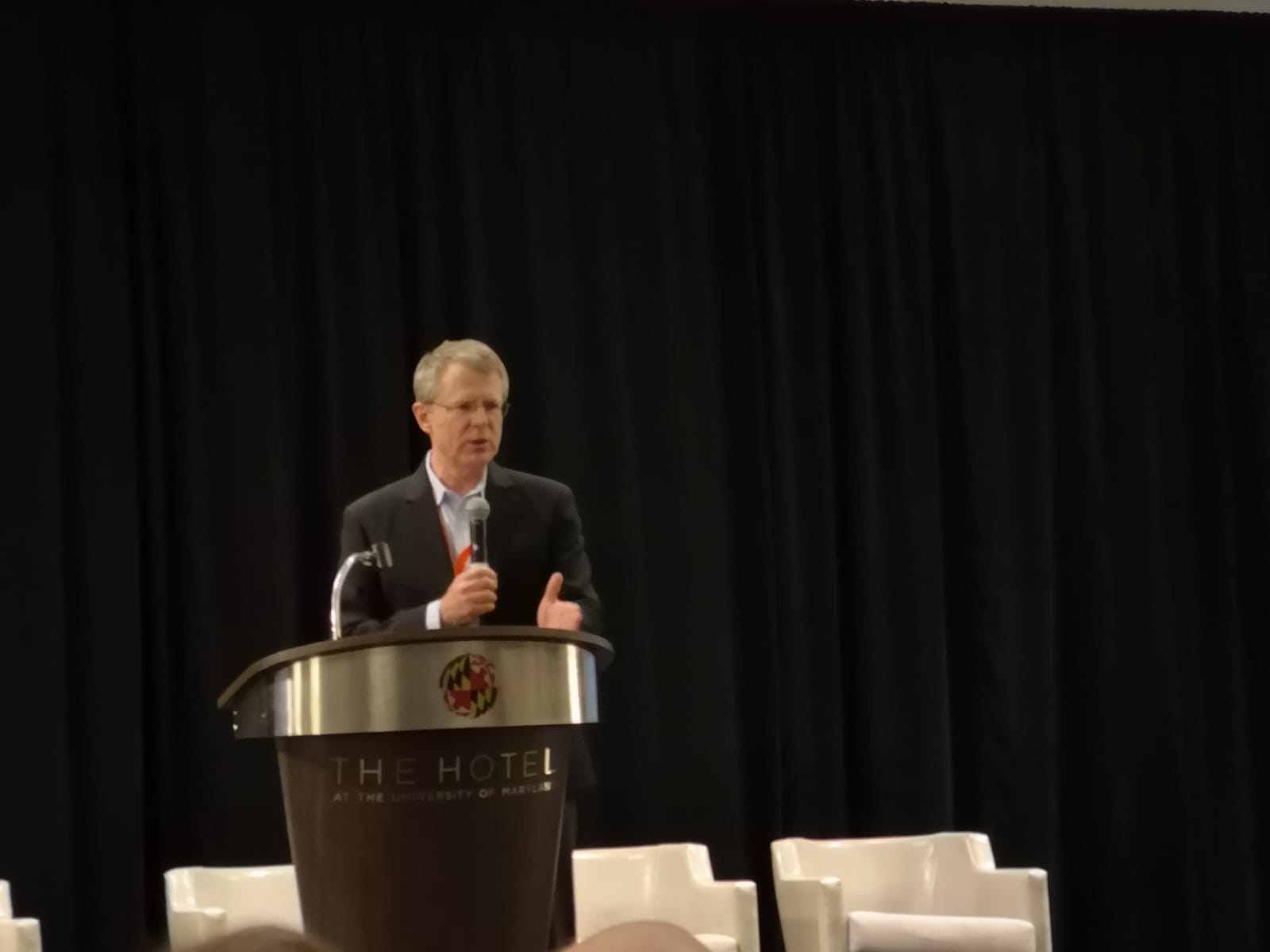 Further updates will be given each day of the Planetary Defense Conference – stay tuned!

Sunday 28 April: One day to go until the Planetary Defense Conference, and we talked to Rüdiger Jehn, ESA’s Head of Planetary Defence, about near-Earth asteroids, deflection methods and this year’s fictional impact scenario.

Every two years, asteroid experts from across the globe come together to pretend an asteroid impact is imminent. During these week-long impact scenarios, participants don’t know how the situation will evolve know from one day to the next but must make plans based on the daily updates they are given.

For the first time, ESA will be live tweeting the hypothetical impact scenario from the heart of the Planetary Defense Conference (PDC) in Washington DC – so you’ll find out the ‘news’ as the experts do. What will they do? What would you do?

“The first step in protecting our planet is knowing what’s out there”, says Rüdiger Jehn, ESA’s Head of Planetary Defence.

“Only then, with enough warning, can we take the steps needed to prevent an asteroid strike altogether, or minimise the damage it does on the ground”.

The scene has been set for this year’s hypothetical impact scenario. Although realistic, is it is completely fictional and does NOT describe an actual asteroid impact. 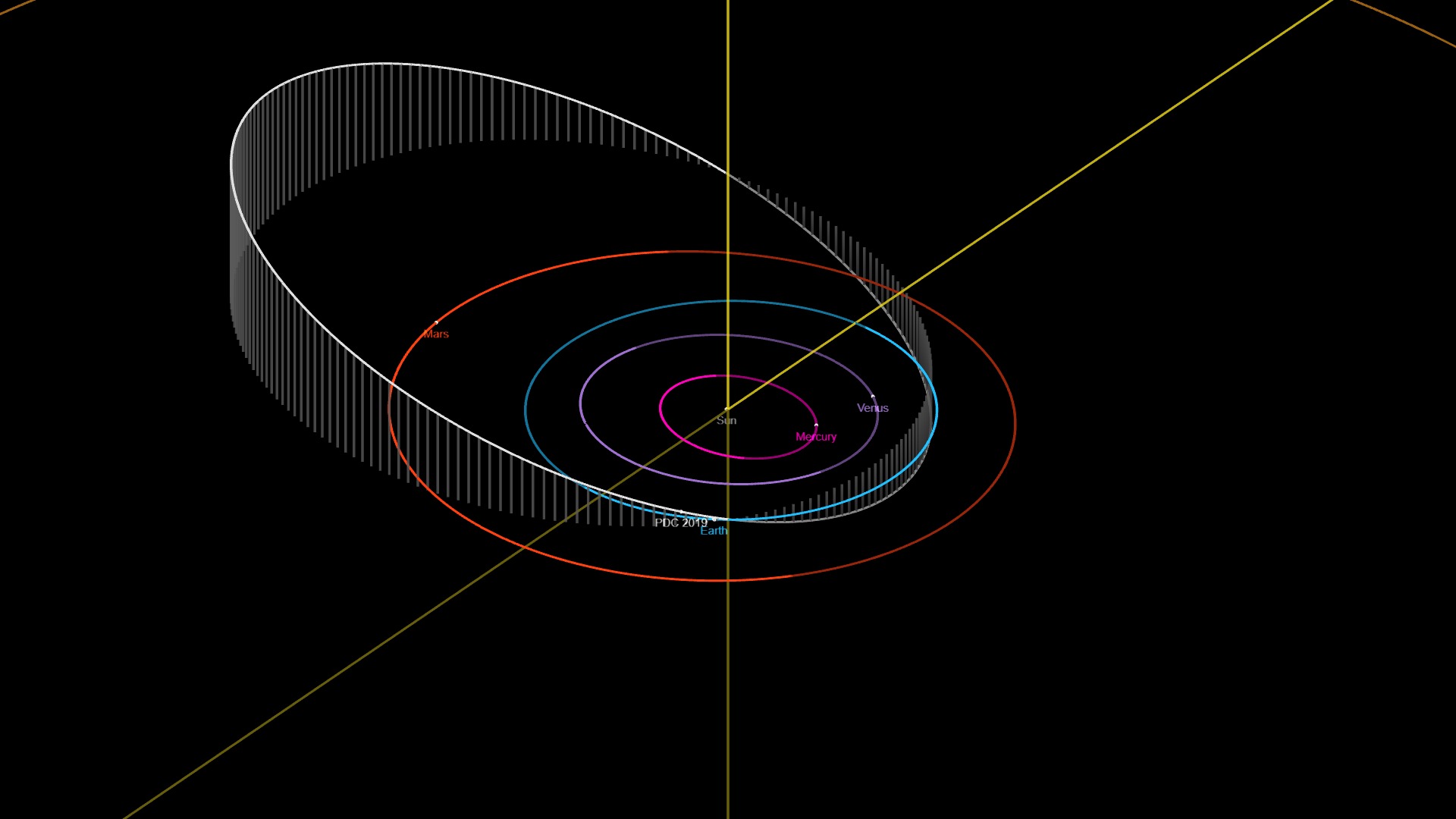 — 2019 PDC is travelling in an eccentric orbit, extending 2.94 AU at its farthest point from the Sun (in the middle of the main asteroid belt), and 0.94 AU at its closest. It completes one full orbit around the Sun every 971 days (2.66 years). See its orbit in more detail here.

— The day after 2019 PDC is discovered, ESA and NASA’s impact monitoring systems identify several future dates when the asteroid could hit Earth. Both systems agree that the asteroid is most likely to strike on 29 April 2027 – more than eight years away – with a very low probability of impact of about 1 in 50 000.

— When it was first detected, asteroid 2019 PDC was about 57 million km from Earth, equal to 0.38 Astronomical Units. It was travelling about 14 km/s, and slowly getting brighter.

— As observations continue, the likelihood of an impact in 2027 increases. Three weeks after the discovery, after observations were paused during the full Moon (and reduced visibility), the chance of impact has risen to 0.4% – that’s a chance of 1 in 250.

— Very little is known about the asteroid’s physical properties. From its brightness, experts determine that the asteroid’s mean size could be anywhere from 100-300 meters.

— Asteroid #2019PDC continued to approach Earth for more than a month after discovery, reaching its closest point on 13 May. Unfortunately, the asteroid was too far away to be detected, and it is not expected to pass close to Earth until 2027 – the year of impact.

— Astronomers continued to monitor the asteroid for a month after its initial detection, which provided them with more information about the object’s trajectory, and have now discovered that the chance of impact is rapidly increasing. By 29 April 2019, (the first day of the Planetary Defence Conference), the probability of impact has risen to 1 in 100.

What’s to be done?

Follow @esaoperations on Twitter for live coverage of the conference, and find daily updates on the asteroid impact scenario here, beginning on Monday, 29 April.